CURRENCY – GOOD NEWS! Our prices are listed in Canadian Dollars (CAD). Your $100 CAD order costs you the equivalent of about $80 USD. 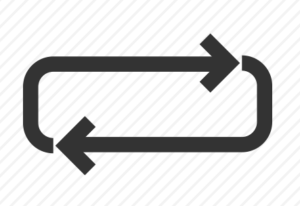 This is a discussion of effects loops as used in London Power amplifiers, and described in our book The Ultimate Tone (TUT1) – and as understood (or misunderstood) by musicians.

Effects loops have become a source of contention among players.

Some like loops, and some don’t. The original iconic amps did not have loops of any kind, so the amps could be “approached” as single functional blocks. The player cold therefore explore specific textures that would not be fully realized if he or she thought in terms of two blocks – a preamp and a power amp split by the effects loop.

Loops were a fad in the 1980s and early 90s, but many players simply did not use them properly, or at all. They received an undeserved bad reputation. However, many players persevered, and use loops correctly. Thus, such a feature continues to be desirable.

There are three common types of effects loops: inserts, side-chains and mixing loops.

The insert is a series make-break connection, usually simply consisting of the jacks themselves.

The wide implementation of this minimal loop gave series loops a bad name. These are best suited to line-level applications or for simply connecting to passive outboard devices, as in London Power’s original STUDIO amp. An improvement on this arrangement is the simple addition of a pure buffer on either side, a form most often found in high-end mixing console channels.

Side-chain loops accommodate low-level devices in the loop with gain added only in the return signal path.

This loop type was used in the earlier versions of London Power’s SESSION amp. Passive mixing of the dry and wet signals assures very low-noise operation regardless of what is plugged into the loop.

Mixing loops have feedback-controlled gain for transparent mixing of the return and dry signals.

A simple switch allows the breaking of the dry path for series operation. This type of loop is an industry standard described in TUT (our book, The Ultimate Tone) as ‘The Best All-tube Effects Loop’. It is used verbatim by many amp companies. In all of these loops, the ‘send’ output can be used to slave other power amps or as a line out. This type of loop is used in our SUSTAINOR amp, and in our Best All-Tube Effects Loop Kit (BFX) kit.

In our previous product line-up, the LONDON POWER SORCERER had two fully featured effects loops built without compromise. This is all-tube circuitry the way it was meant to be, configured to give modern performance and convenience. Each section of the SORCERER had separate SEND and RETURN level controls, and a GAIN switch that optimized the return path for instrument-level devices or line-level gear – that’s -20dB or 0dB signal levels in sound-man lingo. So, your pedals could go in here just as easily as that new pro piece you just picked up. This allows one loop to be “early” in the system and the other “late”. Look for a schematic of this product in our upcoming book, The Ultimate Tone – Vol. 7 (TUT7).

The original London Power STUDIO amp models had a series loop between the preamp and power amp. The loop in the 2003 STUDIO amp could be used as a gain boost, just as many mixing loops can be. The STUDIO’s loop did not have a gain switch like the SORCERER; rather, it had sufficient gain within the return path that pedal-level signals could be boosted up to match the dry path level. Inserting a patch cord between the SEND and RETURN jacks let you access this extra gain. To make this foot-switchable, an A-B box could be used in place of the cable. The SERIES switch should be ‘down’ (parallel mode). STUDIO-10 models have a series loop.

SUSTAINOR has a switchable loop that can be operated in series or mixing modes, and can have stereo returns or mono, and has variable SEND and RETURN levels. Stereo effects loops were shown in our book The Ultimate Tone Vol. 2 (TUT2).

AURORA has a series loop with controls for the send and return levels. The RETURN control is actually a variable gain so that signal-to-noise is optimised at all settings. The loop can be used for extra gain without effects plugged in.

The SUPER-STANDARD and MINI-MARSHMALLOW preamps have loops that can operate in mono or stereo, with Send and Return controls and a gain switch for 0dB/-20dB.

In the ’70s when people first started using effects loops, the loop was just a pair of jacks with an interrupt contact on the ‘return’ jack. Usually these jacks were inserted into high-impedance circuit points that could not drive the effect inputs very well, so there would be level and tone changes when effects were plugged in.

Techs and amp designers got a little fancier in the ’80s, adding ‘Send’ and ‘Return’ controls. At least you could chop the signal down enough not to overload your pedals anymore, but you still had significant loss. So, some loops had gain added after the loop to make up for the expected loss. This gain was always there, adding noise, boosting whatever noise was coming from the preamp. Some compromise! AND …  some big-name companies are still doing this …. duuumb. (PV 5150-series, Fender Twin, the Dumblater).

In the ’90s, studio techniques were applied to the whole “effects loop fad,” and suddenly loops seemed to have something good to offer. ‘Parallel’ or ‘mixing’ loops became popular – with a lot of help from our book, The Ultimate Tone, which was released in 1995. These allowed the ‘dry’, or uneffected signal to stay inside the amp. The loop now became what sound engineers call a “side chain”. The signal is tapped off, routed through the external effects, then mixed back in with the dry sound. The effected sound is called the ‘wet’ sound – as you might have guessed!

So, what does a mixing loop do that a simple loop can’t?

With a parallel loop, you never have an instant without sound. Many of the effects processors introduced through the ’80s and ’90s would mute the signal for a fraction of a second while patch changes occurred. This meant a drop-out in your sound: a tiny slice of time filled with SILENCE. With a mixing loop, your dry sound is always there, even if your processor takes a little nap.

Still, there are times when you want really “in your face” effects sounds that need a simple series loop like those primitive amps had.

You hear those really cool tricks on albums where a delay is being used on a guitar lead and then at the end of the solo, the echoes continue even though the guitar sound has changed back to the rhythm tone. Wow. That must be hard to do outside of the studio, right? Wrong. It’s just the difference between controlling the input or output of the effect in the loop, or ‘Post’ to ‘Pre’ effects muting. Awesome.

In The Ultimate Tone (TUT1), we called this “head” and “tail” switching. Switchable LONDON POWER amp loops all use ‘pre’ switching, where the ‘send’ signal is turned ‘off/on’ allowing the effect sound to fade out naturally like an overdubbed track.

Loops can be built with equal performance using solid-state or tube circuitry. Considered as a functional block, an effects loop should provide unity gain – that is: no gain, no loss of signal – and be transparent. The presence of the FX block should itself not be obvious tonally.

Techs debate whether loops should be fully bypassable, while designers who know what they are doing realize it is best to leave the loop in the signal path at all times. A transparent loop does not change the signal. Any amp builder who tells you this is impossible needs to go back to school.

Modern solid-state loops often use a single dual-section FX mix control to set the send signal level and return gain. With op-amp circuitry this is simple, but it can be applied to tube topologies, too. Semis are about an order of magnitude quieter than tubes, but very respectable noise performance can be eked out of the glowing glass bottles.

Tube loops are more aesthetically pleasing in a tube amp, but they easily corrupt the signal if poorly designed. They are usually designed by the same folks who insist on a bypass. It is very difficult to design a solid-state loop with sonic compromises. There may be signal handling issues if the designer has not anticipated tube preamp output levels as “used by real musicians”. Fortunately, most big manufacturers have competent designers.

Where can I learn more about loops?

Our book The Ultimate Tone (TUT1) illustrates the basic loop concepts of level, send signals, return signals, mixing/series options, noise optimization and dB level references. It takes one full dual-triode tube to make a proper loop. Anything less will be a compromise to your sound, let alone to the ergonomics you might miss out on.

The Ultimate Tone – Vol. 2 (TUT2) shows the basic stereo effects loop layout, and our upcoming book TUT7 will expand on all things loopy.