Our Dual Function Controller allows independent control over two functions or features in an amp. Each section has its own switch interface and debounce circuit, its own electronic latch, its own LED driver, and three outputs to interface with relays, shunt-jfets, and series-jfets and/or mosfets.

For about the cost of two Electronic Relay Kits (ERKs), DFC offers three times the switching capability and many more options for how to interface with the audio path and features to be switched.

Many players like to have independent control over the features of their amp. For example, a 2-channel preamp with one other feature, say an FX loop, constitutes two functions or features to be controlled. Overall there are four combinations of preamp channels and FX status, and thus four “voices” for the system. For ideal ergonomics, Q-LATCH and a controller board would be used to allow single-button direct random access from any one voice to any other. However, some playing styles will not need that ergonomic capability and will be well suited to having separate buttons to select the preamps and the loop independently.

For the above example, one half of DFC can select the preamp channels while the other half turns the FX loop on/off. The onboard LED drivers allow indication of both states of the switch elements. This means that ch-1 can have a LED and so can ch-2. Individual LEDs can be used, or bicolour 3-lead LEDs can be wired in place.

For some applications, using 2x Mechanical Relay (RLY) or 2x ERK will suffice. RLY requires sufficient current for the relay coils. Both RLY and ERK require a latching alternate-action foot switch or panel switch, and this might limit the aesthetic options. RLY‘s contacts can be wired for shunt or series switching of the audio signal. ERK can only interface with the audio circuit using shunt-jfets. Contrasting these simpler options, DFC can control relays, shunt-jfets, series-jfets and mosfets – all at the same time if required. DFC also uses a switch type that has many physical forms, so DFC can outwardly match RLY, ERK and the Q-system if those other elements are present in the guitar rig.

Panel and foot switches are aesthetic items in addition to being functional – so, each builder and player will have distinct preferences regarding them. The switches should be normally-closed (NC) and open when actuated. As a panel switch, Q-SW works well here. For a foot-switch, Q-FSW works well – one per section. The ERK-style chrome foot switch (FSW) can also be wired for pulse operation and used with DFC. See The Ultimate Tone Vol. 1 (TUT1) Fig.9-77.

LEDs are also an aesthetic item, and players or builders may wish to use different colours, sizes or styles than those included with DFC. The onboard LED driver can drive any LED connected. LEDs supplied with DFC are standard-brightness 3mm round green LEDs.

When using relays to switch the signal path or feature, add as many RLYs as required. If only relays are used, power can be +12Vdc or -12Vdc at a current sufficient to support the relay coils (12mA per RLY) plus about 15mA for DFC if driving LEDs.

When using shunt-jfets, -12Vdc is required. The jfets are n-channel types and will control signals up to 10V peak. 15mA is required if LEDs are driven. Relays can also be added provided the supply can support the relay coils load. Note that if C12 is replaced by a wire link, the series-jfet output will drive shunt-jfets in complementary fashion to those tied to the shunt-jfet output, i.e., one set is ‘on’ while the other set is ‘off’.

When using series-jfets, +/-12Vdc is required. The -12V rail draws 15mA if LEDs are driven, while the +12V rail draws <1mA. Discrete jfets may be tied to the series output but wired for shunt switching, as well, provided series gate diodes are added to each jfet. The shunt output line can also be used, as can the relay control line. When relays are added, assure that the -12V rail can support the current load of the relay coils.

N-mosfets can be controlled from the series control line, provided the mosfet is wired with its source grounded. This is suitable for cathode-switching power tubes, or selecting Power Scale pots, or for switching high-current ground-referenced loads that take their power from a positive voltage, etc. For mosfet control, +/-12Vdc is required. Series-jfets, shunt-jfets and/or relays can also be controlled, again with the +12V requiring <1mA and the -12V requiring current for LEDs and relay coils.

The Standard DIY Kit requires assembly, and includes the PCB, parts and notes.
The Built Kit includes a pre-assembled PCB, and notes. 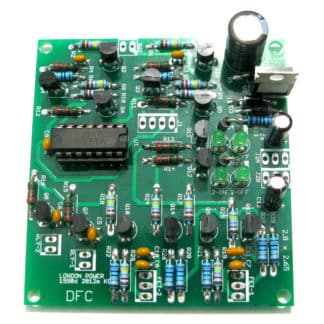